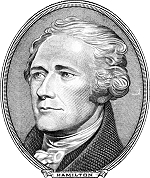 Alexander Hamilton epitomises a true American Spirit. As America's first Treasury Secretary, Hamilton saved a debt-ridden emerging nation from banana republic status, saw us through a financial panic as bad as 2008, and foresaw our future as a modern mixed economy. As a practicing lawyer and a signer of the Constitution, he was a pioneer of judicial review. As a lifelong journalist—he reported on a hurricane in the Virgin Islands when he was fifteen—he inspired and wrote the op-eds that became theFederalist Papers, and founded theNew York Post.

He accomplished it all against great odds. He was an illegitimate orphan; an immigrant; a brilliant Ivy Leaguer who dropped out to spend six years in the Army. He made powerful friends—George Washington—and powerful enemies—Thomas Jefferson. He was passionate and passionately forthright—he confessed to the nation's first sex scandal, and provoked the Vice President of the United States to challenge him to a duel.

His legacy is modern America, and its symbol is New York, his adopted city—urban, entrepreneurial, open and diverse.

We are no longer accepting registration for this tour